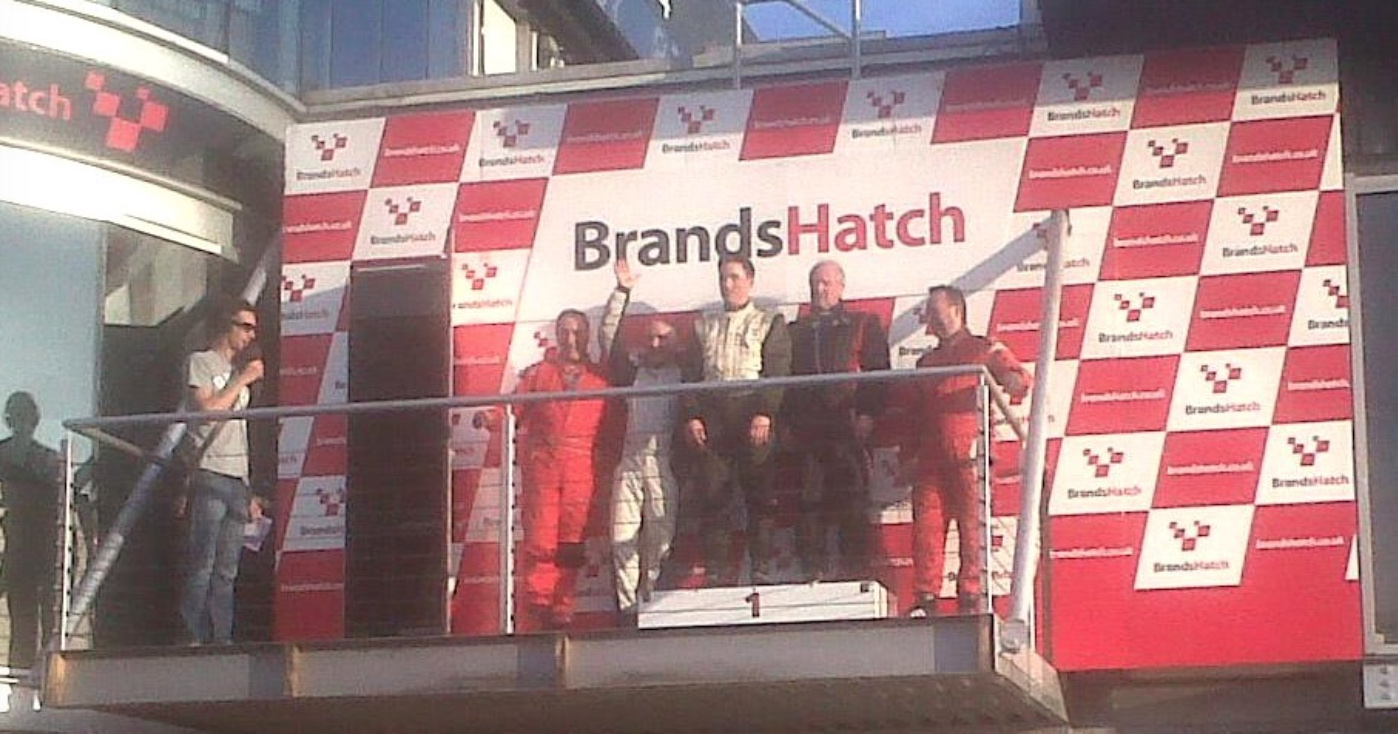 Brands GP is a fabulous track and I was pleased to be sharing the car with MCR chief Clive Hayes for the 1hr Enduro. In the sister car was Matt Manderson and “Jedi Master”  Dave Connor so Team MCR would be ensured of a strong showing with 2 evenly balanced teams.

Qualifying  –  Clive went out first and carefully bedded in the new brakes and wheel bearings which had been installed post Oulton and after all had be properly installed he handed over the car for my attempt to secure pole.

The car felt great, which was more than could be said for the driver. I have been suffering from an ear virus for several weeks which affects balance and soon made myself feel very sick as I hurtled round the swoops and turns of the challenging Brands GP circuit. I soon felt better as Cindy held up the P1 board and the time was right on Mike Jenvey’s lap record. I was delighted as it certainly didn’t feel that I had driven that fast. Looking at the joint qualifying times of the 2 MCR teams I could see it was going to be very tight for the top spot.

Race  –   We decided that Clive would take the start and pit himself against the hard charging Matt Manderson as I thought that if Matt and I went together we were bound to engage in a battle which whilst exciting would have hurt both teams race pace. Clive made an excellent start and fended off Matt for the first lap. Matt then squeezed past and I had the unusual position of seeing the red and black 66 MCR flying round the track from the outside. Clive did a great first stint bringing the car into the pits in good shape and in third place. Matt Manderson stayed out and continued to pile on the pressure building a 28 second lead prior to Clive coming in and the number 12 MCR was 3 laps in the lead when I rejoined after the mandatory 4 minute pit stop.

Dave Connor rejoined after their pit stop on lap 23 with a 32 second lead and with time ticking away I could tell it was going to be touch and go for the win!

I finally caught him on lap 32 but it wasn’t over yet as Dave defended well for the next lap. We crossed the line nose to tail on lap 33 and I made an almighty lunge down the inside at paddock, it was touch and go for a moment but I made it past and into the lead. Dave clung on for the whole lap and nearly made it back past as I was forced to take evasive action past a wandering back marker.

Elated I crossed the line to take the win with the Number 12 MCR in second. A MCR 123 was only thwarted on the last lap when Scott Guthrie out foxed Peter Williams on the last lap for a fine third in his Van Diemen.  Sebastien Bamsey and Nick Phillips were over the moon with their 6th place finish.