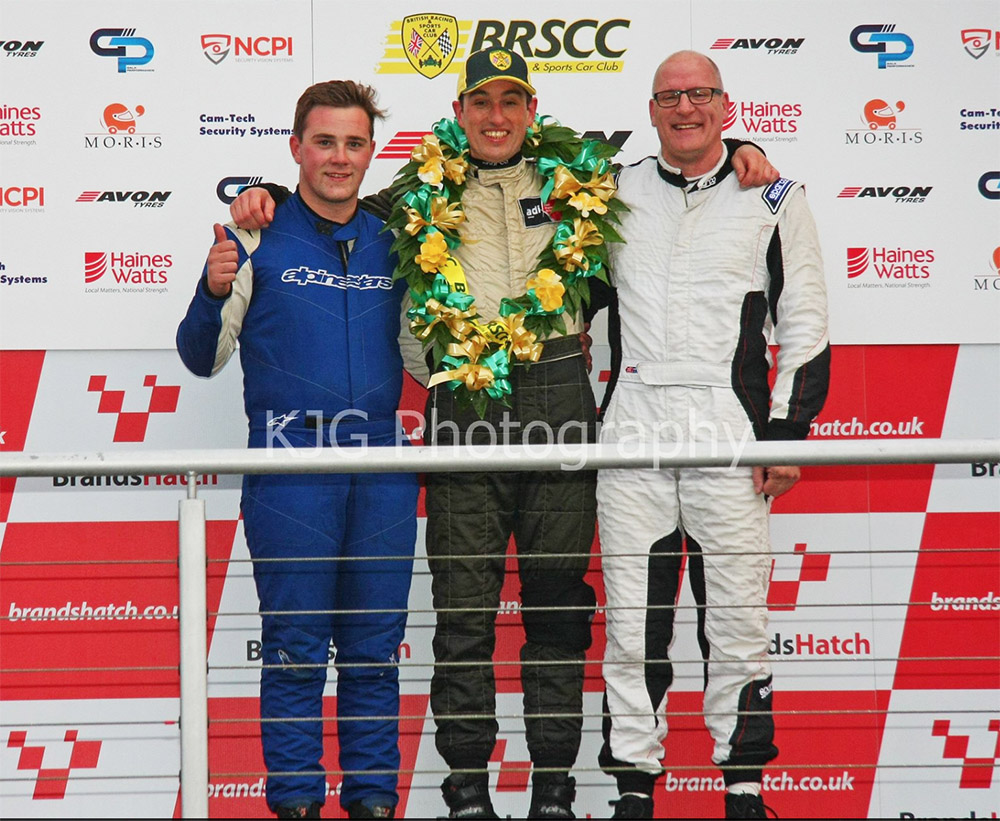 Brands Hatch is difficult to pass and needing to win the race it was key to get a front row start and preferably pole position.

The cold conditions meant the track was particularly slippery in a couple of key areas but I soon posted some decent times and was pleased to see Dad put out the P1 on the pit board about halfway through. I pitted to make a couple of changes, but after going out on about the second lap round the red flag came out so end of session and hung onto pole by all of 0.103 of a second to Michael Gibbins with Tom Stoten in third and Paul Trayhurn in fourth.

We made a couple more minor set up changes before the race and cold conditions again meant it was probably going to be slippery. To win the championship I needed to win and Michael needed to finish third or lower so this was going to be tough! The nerves were not helped by the dash failing completely in the garage only to be saved by the classic IT fix of switching it on and off several times….

Red lights on and I dragged the clutch slightly and the car lurched a little forward. Reset the clutch position only for the lights to go out immediately. A little too much gas and I made the classic Brands Hatch pole man start and the car slid gently sideways so into second place it was………

Plenty of concentration then required to get a good exit from Paddock and avoid any incident at Druids. Michael had got away well and I needed to make sure he didn’t make a break whilst hoping that Paul and Tom could stay in contention to make it a three or four way race.

This didn’t happen though as they were locked in their own battle so by lap four a 2 second gap had opened from me to Paul so I set about making a nuisance of myself in Michaels mirrors!

We then had a really hard battle for the lead over the whole 38 laps with the gap very rarely above 0.5 of a second and from about lap 18 it was generally around 0.25 of a second. I was a lot better into and around the top section of Druids by no way by here and Michael was pulling enough of a gap through Surtees meaning a challenge into Paddock was always going to be difficult. I got alongside but on the outside and he didn’t make a mistake under braking and held track position.

The final lap board came out so I gave it one massive effort through Paddock, got to touching distance through Druids and much to my surprise passed on the outside going down the hill into Graham Hill!!!! Post-race it turned out that Michaels car had started to run out of fuel – a feeling I remember all too well from the Brands Enduro race earlier in the year!

Well done to Michael Gibbins and team in their MCR who won overall in a great close fight which finished as follows;

Level on points minus drop score at 102, level on race wins at 4 each, level on second places at 3 each. Michael wins on overall points on next lowest finish. Third v Twelfth.

Thank you to all the ADI Group for their fantastic support for another great year!

Thank you to Dad for supporting again and Mum for the MCR Team “Racing Cake” and of course Paula, Jazmine and James for supporting trackside with enthusiasm!