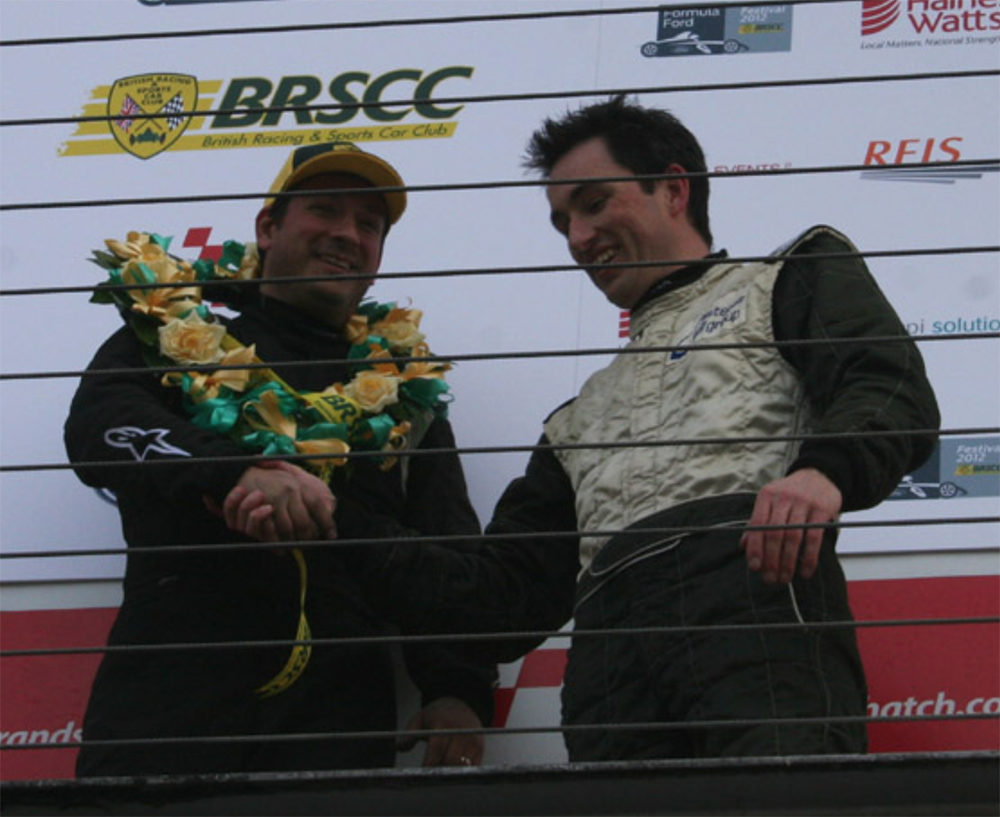 Qualifying – The track was still wet in places in qualifying and I went for maximum rear wing not wishing to risk the car on the final race weekend where finishing 2 places behind Robert Oldershaw would be good enough to secure second place in the 2012 championship. The car felt good although slow down the straight due to the  drag from the rear wing and we settled for 3rd on the grid just 0.08 behind Rob

Race – The track was again still damp in places and it was very cold. The side of the grid I was on was still wet. Red lights out and I gently slid sideways with little forward momentum! The car gradually gathered pace and I went side by side into paddock with Darren Burke in the Ray. Unfortunately right in the middle of the corner was still very wet and I slid sideways into the Ray for what was minimal contact but as he pulled ahead ran over the front splitter which would ruin front downforce for the rest of the race.

Rob Oldershaw had shot into a good lead and seemed to be glued to the track whilst the rest of us struggled to get the tyres working. However it was to be short lived as the safety car came out to recover a stricken car at Druids. This put everyone line astern again and we all charged off on lap 9. I was still in 4th behind the Ray at this stage and as Mike and Rob started to pull away decided I need to get past quickly to keep in contention of the race win. I got a good run out of Clearways and got into the slip stream of the Ray as we charged along the start / finish straight. He defended the inside but I knew we were strong on the brakes into the corner so I went for the outside at Paddock. It was touch and go around the outside but I made it through, the race commentator describedit as the move of the festival!

This battling with Ray had left me 3.5 second behind the lead pair of Rob and Mike but I was determined to close the gap. The next few laps were all out attack with the car on the ragged edge at times but it was working and by lap 19 I was right in the tail of Mike Jenvey with the best seat in the house as he mounted an all out assault on Rob Oldershaw’s  lead position. The next few laps saw us circulating as one and as Mike challenged again at Druids I saw my chance and lunged up his inside just hanging on to second. However he redressed the balance a lap later as we both sought a way round Rob who was doing a great job of defending.

Mike finally made it into the lead with 3 laps to go and I managed to get alongside Rob going into Paddock but I was on the inside and he wasn’t going to give up that easily! Both of us braked as late as we dared and behind on the outside left me no choice this time but to pull back in behind. I had a great battle with Rob for the final 2 laps, saw a third place finish and secured second in the championship – FANTASTIC.

A massive thanks to Alan and Tina Lusty at ADI Group together with all the supporters from ADI who have provided us with vital support and followed us up and down the country. Once again a big thank you to Clive, Cindy, Ken and Anthony at MCR who have provided a fast, reliable car and unending track side support. Thank you to Scott Davies the man who can drive a car by looking at data lines alone! Big thanks to Dad for continuing support in the garage and on the pitwall and of course to Paula and the kids for letting me do this and having fun at the track!