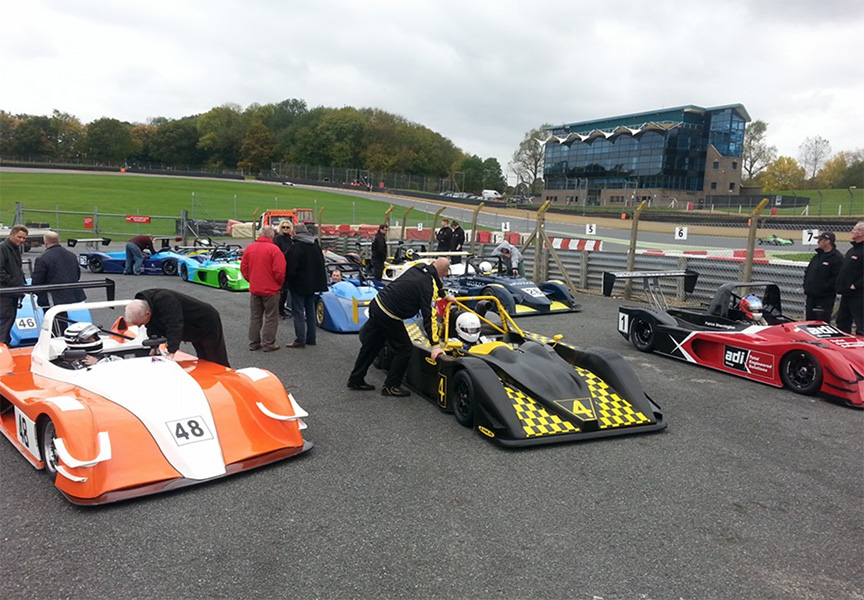 With the championship secured and the car sold the week before to a new owner Brands was going to be about a good but low risk finish.
Qualifying
Qualifying was dry but as soon as I started I felt an issue with the front brakes. The general braking was not as sharp as usual and the front right locked when pushed hard. Halfway through the session I was down to fifth so decided to change the lines I was using to compensate for the braking issue.
With minutes to go I was up to second, tried a little harder and got pole only to be bettered again by Michael Gibbons. The seconds ticked down and I knew I had time for one more lap. I hung back to get a clear lap and really went for it taking clearways flat, the inside right locked as I hit the braking area but I managed to cling on, get the front to grip and charge for the line as the flag dropped for the end of the session.
To my delight I had got pole by five thousandths of a second!!!
Race
Red lights out and got a good start although the car did the classic Brands Hatch pole shuffle as the gradient slid the back out a little further than I would have wanted. Held on into Paddock Hill and got clear away from the squabbling pack on the run up to Druids.
The first couple of laps I pulled a reasonable gap but the charging Michael Gibbons was close in my wheel tracks. The sun was low into clearways meaning I couldn’t check my mirror to see where Michael was on the way in. A combination of trying to look and too much caution meant that he slipped up the inside on about lap three and shot off hard to try and make the break.
I gave chase but got held up a little by backmarkers and the gap widened to about 3 seconds where it stayed for some time.
The car felt good and I decided with ten minutes to go that settling for second wasn’t for me so started to push hard. I noticed that I was really gaining into Druids each lap round and with about 3 laps to go got the gap down to about a second.
I could see some back markers coming up so knew that this was going to present an opportunity so readied myself to make an attack.
With a lap to go Michael caught a backmarker through clearways and tried to dive up the inside. I went wide and slowed up ready to launch onto the start finish straight. To my surprise Michael slid wide and onto the curb and then the grass. I took avoiding action and slipped through into the lead with a lap to go!

Head down, no mistakes and crossed the line for the win – amazing!
Pole, Win, Fastest Lap, 2015 Champions! MCR Race Cars
A great way to end the season