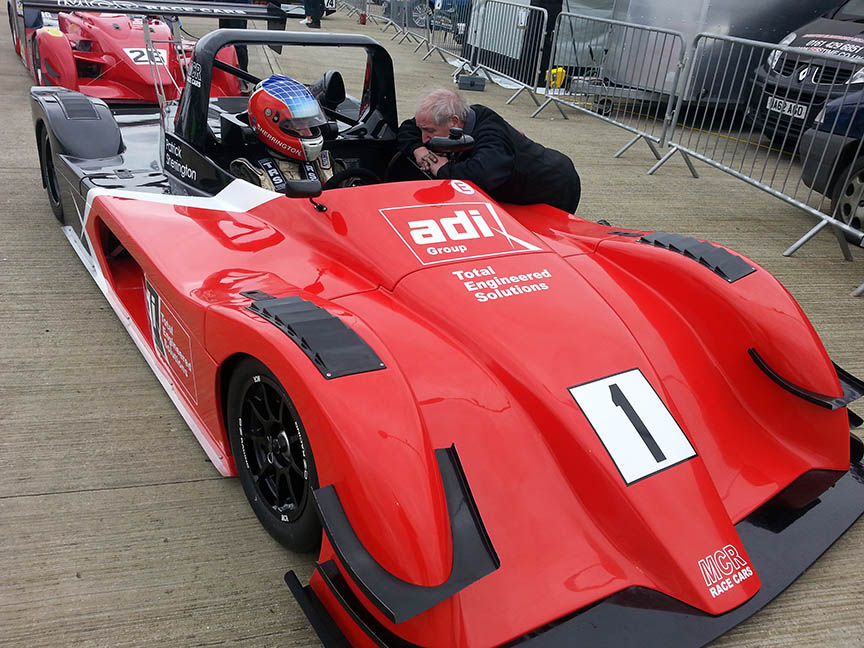 Qualifying
Thankfully after torrential rain in the morning we were greeted by bright sunshine for the qualifying session at the blindingly fast circuit of Thruxton. It was very windy though which was making for some scary moments in the really fast sections towards Church corner.
I got a good lap in early on but then the curse of the camera struck as it created a short circuit in the electrics and I was without dashboard and gear indicator for the rest of the session.
Nick Bates took an excellent pole with the myself in second and Tom Stoten in third although all of us were only separated by 0.1 of a second!
Race
I was on the outside of the grid for the start but the wide sweeping turns of Thruxton meant that if I got a good launch I could probably hold it round the outside into the complex so that was going to be the plan!
I got a rocket start and easily led into the first turn. I pulled about a 1 second gap over the next couple of laps but Nick Bates remained in close attendance, the Lola loving the fast flowing nature of Thruxton. I was perhaps too conscious that we only need a good finish to clinch the championship rather than going all out for the win on the Lola continued to challenge into the complex and out of Church.
Sure enough I didn’t have enough of a gap and when I was held up by a back marker into Church Nick seized his opportunity and swept by into the lead. The question was what to do now?
I could stay with the Lola but once in the slipstream could make no impression so it was going to take a mistake or traffic for me to seize the first place slot. Neither came and despite getting really close towards the end Nick drove a great race to take the win.
No Pole, No Win, No fastest lap but CHAMPIONSHIP!
A fantastic feeling to win the first championship in Duratec for MCR having finished runner up on three occasions. Many congratulations to Clive and Cindy at MCR for building a great car.
Thanks to Alan and Tina Lusty at ADI Group and all the supporters who follow the team up and down the country – This is championship number 3 with the ADI Group.
Thanks to Dad who has been trackside now for 16 years being transport, mechanic, pit crew, (and anything else that needed doing!) all rolled into one!
Thanks to Paula and the kids for all their support and the “hanging around”
Thanks to Scott who has driven the laptop and helped us chip away at those vital tenths
Thanks to Ken, Anthony and Richard who have built, repaired and supported both from the factory and the trackside
And of course thank you to Mum for the now famous “Racing Cake” worth at least half a second